A downloadable game for Windows, macOS, and Linux

Wheels of Aurelia is a narrative road trip game set in the roaring Italian 70s. Half racing game, half interactive fiction, it tells the story of Lella, a restless woman driving on the roads of the western coast of Italy, the famous Via Aurelia.

Wheels of Aurelia plays like an old-school isometric arcade racer, except that you get to chat with your passenger while driving. The story takes places at the end of the 70s – a time of terrorism, kidnappings, and political turmoil in Italy – and it will introduce you to that world and its dynamics thorough a cast of characters that you have never met in a video game. It's up to you to discover their motivations for driving along the coast of Italy and away from their homes.

Based on your choices – and the places you'll decide to visit – you may end up in car chases, illegal street races, or in tense debates that will make you wonder who your travel companions really are.

In order to download this game you must purchase it at or above the minimum price of $14.99 USD. Your purchase comes with a Steam key. You will get access to the following files:

Omg I was checking my bundles for more games to play and randomly stumbled upon this and found out you made Milky Way Prince, I loved that game, got it on Steam lol

Nice game & cool artwork! Think you would be a great fit for the Italian game jam we are hosting. If you are interested you can check it out here: https://adrenalinerush.gamejam.it

Keep up the good work!

fun story but oh god did the save point system ruin it for me. When presented with a multiple ending story, I start with one main "entrance" and then find the endings from there before moving on to another "entrance". So starting off in Roma then ignoring hitchhikers but still taking a right, then playing the game normally. Then I would start in Roma again but go forward and ignore hitchhikers and then continue playing normally etc... this is fine until you get to Bracchio. It opens up with a race that isn't avoidable and the only impact on the story is if you lose, you win, or take a left when given a chance. There aren't any hitchhikers on the way because it's a race. So having to constantly repeat this section despite just wanting to get to the end of it is such a hassle. It gets worse when you've ran through every single one of the dialogue options. I do understand the game is wanting you to complete the race so it can decide what route to put you on but it doesn't make it better. It's even worse when I meant to skip the farmer hitchhiker but ended up slowing down too soon, making me pick him up(the ending involved Padre and having the farmer involved screwed me over) . That completely ruined me getting an ending I wanted so I had to REDO a race around 10 minutes before the gameplay I needed to actually focused on started. Me winning or losing that race was inconsequential, only impact it could have on me going on the Padre's route would've been taking that left.

The only other flaw I found is that dialogue options would sometimes appear out of order or without context. The worst was I got an ending talking about kidnappers or something and I was incredibly confused because not once was kidnapping mentioned. Also characters and events would cut each other off, so I think the roads need to be longer- I had to do donuts at some parts to get the full conversation so that I could then trigger the ending.

TL;DR Idk why the developers just didn't add a save at Sienna or have me choose when to have saves ;;;; and dialogue glitches go brrrrr

Be nice if there was a way to exit the game besides alt-tab'ing out once you accidentally(?) go to the disco and get the credits...

sorry for the late reply! Those are opening credits! Apologies if you were joking :D

Oh I wasn't joking. It felt like I made the "wrong" choices and ended the night early or something.

Oh no! That was just the intro, the game starts after the credits :D

Could you upload the Android version from Google Play to here? Would be nice to see that!

The "we'll have an update out in a few days" comment below is marked as being from 8 months ago.

Looks like I just paid some money for nothing (admittedly only $2, but where's the fun in downloading games that don't work?)

The MAC64 version works!  Thank you for the prompt and helpful reply!  :)

"Wheels Of Aurelia" needs to be updated.

The developer of this app needs to update it to work with this version of macOS. Contact the developer for more information.

I'm not having luck running WoA in Ubuntu 20.04 x64 - a black screen comes up and then crashes right away. Any tips? Thanks!

It ran fine for me in 20.04 - I installed in through the itch.io app, if that makes any difference.

This game has been added to Cloudsaver

Is it going to be updated any soon? (Not running of the latest Catalina)

yes! for sure, trying to find a day to work on this, we are about to launch Milky Way Prince and working on Saturnalia so we haven't had a chance yet, sorry for the wait!

I'm really looking forward to playing, hope you get the time to update soon!

thank you for your patience 🙏

Can we expect a Catalina update soon?

I'm waiting for it too!

Thank you! Italy has its own strand of Prog Rock, and the songs in the OST were indeed written to recreate those sounds https://en.wikipedia.org/wiki/Category:Italian_progressive_rock_groups

I love this game! The graphics are so unique, the music is incredible, and i enjoyed the story and the characters. It's short but it has many endings so you can replay it many times. Thank you so much for creating such a cool game.

Thank you for playing it!

Thank you very much - appreciate that!

I'm looking forward to the 64-bit Catalina version - excited to play this!

Hi! This looks like a lot of fun, but I can't get it running on Ubuntu 18.04. When trying to launch it from the itch.io client nothing happens. Anyone know what to do?

Played this once through on Playstation.  I really enjoyed it!

On Windows and not able to get past car selection screen. Controls stop working entirely once I reach that part.

Hi could y'all tell me what is the games playtime? I wanna record this for my YT channel because it looks super fun but I don't want to make it too long of a series

each playthrough is ~15 minutes, there are 16 different endings in total.

Thanks a bunch guys!

Impossible to get further than car selection (the menu in general is quite broken and nothing launches (kunbuntu 20.04)). Very sad, 'cause the game looks nice!

Sorry! We'll update (and notarize...) in the next few days!

It's ok :-) I had the game in the Racial Justice and Equality Bundle. I would love to try it, but I'm just happy to have given money anyway.

That would be great!

Excited to try it out then!

Hey! It's still not working for me unfortunately. I clicked the "Send Feedback" button on the crash form, but let me know if you need/want any additional information. I was able to try it out on a Windows PC and enjoyed the game :)

Oh no, very sorry to hear. Can you send us an email at info at santaragione dot com with details on you machine and the crash log? sorry again.

My review can be listened to as a short podcast (In German only, sorry.).

Short: I love the game very much for it's round and really unique design. The dialogues could have gone more into depth. But the 70s Italian atmosphere is great through the music and the landscape you drive through. After playing 6 sessions I spent a whole morning just searching for all the teased events in the game (the name of my character Lella, Aldo Moro who was kidnapped, abortion legalization in Italy, etc.). 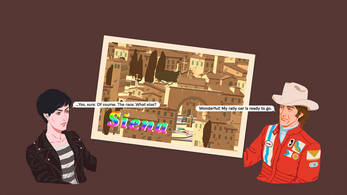 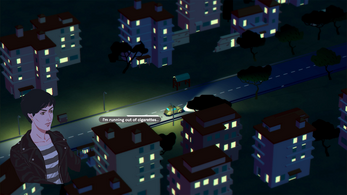 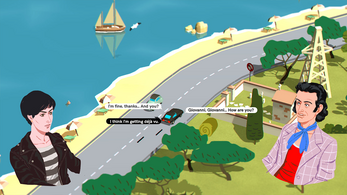 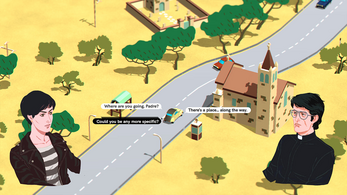 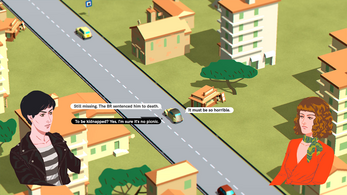